A Champion Of Diversity 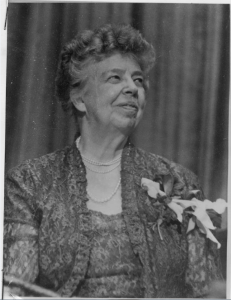 I’m thrilled that Eleanor Roosevelt will be sharing the $5 bill with Abraham Lincoln. ER is one of my heroes. She’s an inspiring champion of diversity and a leadership role model. I’m fortunate to know of her impact firsthand – both as a resident of Roosevelt country in New York’s Hudson Valley, and as a nonprofit strategist working for greater diversity within nonprofit organizations – from executive staff to board members to donors.

At a time when messages of inclusion feel sorely needed in our nation and the world, I believe that nonprofits can play a powerful role in demonstrating the value of diversity and developing compassionate leaders and service-minded individuals. For proof, here’s a look at the impact of an organization built on the character and values of Eleanor Roosevelt.

The Eleanor Roosevelt Center at Val-Kill (ERVK) is a nonprofit organization based at her home, Val-Kill, which is located near President Franklin Roosevelt’s family home and presidential library in Hyde Park. The mission of ERVK is to continue the legacy of the great first lady and humanitarian. In accomplishing that mission it is building relationships with a key audience – young people, and specifically young women.

There are two Eleanor Roosevelt Leadership and Human Rights Legacy programs: Girls’ Leadership Worldwide (GLW), for high school girls, which is held in the summer; and Eleanor Roosevelt Community College Emerging Leaders (ECCEL), for students, female and male, attending community colleges in Dutchess, Orange, Rockland and Ulster counties of downstate New York. (Val-Kill is located in Dutchess and the others comprise a neighboring region.)

We might expect that Eleanor Roosevelt would be a remote figure for teen girls today. Not true, says Kathleen Dunham, ERVK executive director. Many girls connect with ER on a very personal level. “Girls are particularly struck by the fact that [ER] was shy, not really outgoing, not happy with her looks; that she suffered through neglectful parents; and [she] still put all of that aside to live her passion. While they come to the program with some knowledge of ER, they learn how those things only made her stronger.”

There’s evidence that those lessons from ER are applied with great success. Surveys from the 2015 program show that the top three areas of growth for participating girls were self-confidence, leadership and commitment to making a difference, with 92% feeling prepared to take on a leadership role in their school or community.

To read the girls’ analysis of what they learn during the nine-day GLW institute is to recognize how much meaning can be conveyed through even a relatively short experience. Consider these examples from 2015 alumnae:

“I learned that I can use my feelings I’ve been ashamed of for the greater good. I also realized that truly everyone has the potential to be a leader, and that a leader sees that and is not threatened but rather inspired.” – Myisha, Sudbury, Massachusetts

“My definition of leadership when I first began this journey was completely different. I thought it meant you were the ‘boss’ of the group. But no, now I know how inaccurate that is. Leadership is the act of having a purpose and bringing along others.” – Alana, New York, New York

Who wouldn’t want a Myisha or Alana in their future director’s office, serving on the board or as a loyal donor? Programs for young people can be a great generational investment for nonprofits and yield reciprocal benefits.

ECCEL for community college students also has a strong track record in shaping leaders and impassioned citizens in the Eleanor Roosevelt mold. Interested students apply for the program, which runs through the college year. They typically represent age, gender, racial and ethnic diversity. Recent participants reported these outcomes:

ECCEL alumni may carry their enhanced personal skills and perceptions to other colleges or directly into the workforce. Their influence may be felt at home, on the job, within their communities or beyond. It’s a case for nonprofit (as well as for-profit) support of focused education programs, which might be service-learning at local institutions, to help create a more engaged citizenry.

Believing in Change and Its Power

Chris Roellke is dean of Vassar College and a past ERVK board chairman. Ask what stands out to him about Eleanor Roosevelt as a role model of service and he quotes an enduring ER belief: “‘It is better to light a candle than to curse the darkness.’ Her commitment to service always brought with it a sincere optimism that efforts to promote change will, in fact, make a tangible difference for those that are disenfranchised.”

And, he adds, “Most noteworthy to me is Eleanor’s ability to work so effectively across differences…. to reach out, listen and embrace a very diverse audience.”

I believe that’s precisely what nonprofits do – or are working to do better. In its own way, every organization is a candle pushing away the darkness. But by pushing toward greater diversity in all areas – and in particular, by targeting young people as change agents and future service leaders – every nonprofit can burn brighter. Think of the collective potential to light the world.